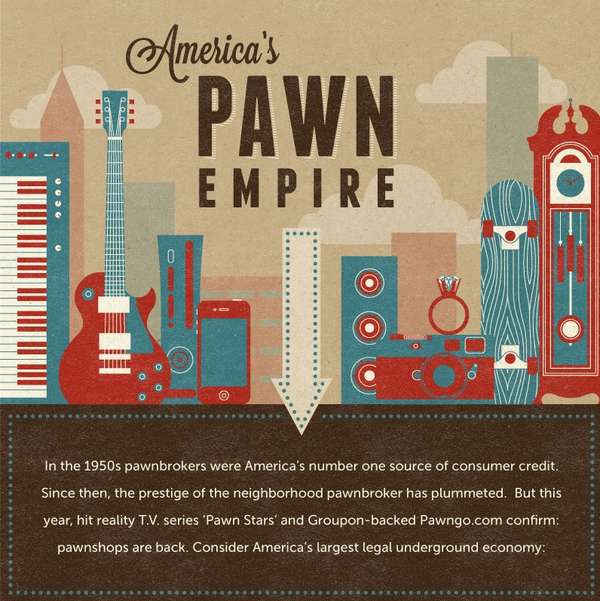 The Americas Pawn Empire Infographic Takes a Look at the Phenomenon

Rebecca Byers — March 2, 2012 — Pop Culture
References: frugaldad & frugaldad
Share on Facebook Share on Twitter Share on LinkedIn Share on Pinterest
FrugalDad.com's Americas Pawn Empire infographic is a review of the latest statistics around the pawn shop business in the US, which has come into the spotlight in recent years with the success of reality television shows like 'Pawn Stars' and 'American Pickers,' and the creation of Pawngo.com, a Groupon-backed online pawning service. According to the infographic, pawnbrokers were the number one source of consumer credit in the 1950s.

The comprehensive Americas Pawn Empire infographic includes surprising facts, like that there are more pawnshops in the US than McDonald's restuarants, and that Pawn Stars is the second most-watched reality show, second only to Jersey Shore. Pawning is also technically the world's oldest profession, and has started to reclaim its "historic roles as neighborhood flea markets, banks and museums" in an era of recession-inspired frugality.
4.4
Score
Popularity
Activity
Freshness
Attend Future Festival