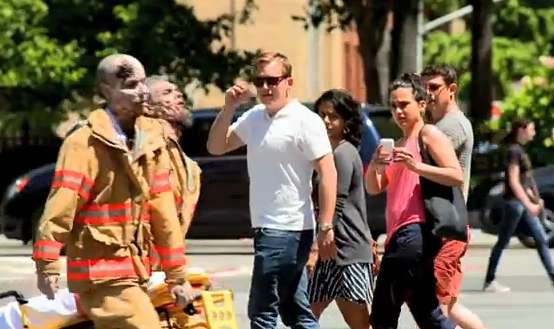 Sarah Nazim — August 11, 2012 — Marketing
References: amctv & fluffylinks
Share on Facebook Share on Twitter Share on LinkedIn Share on Pinterest
This freaky AMC apocalypse guerilla marketing tactic was done on the streets of New York to help promote and encourage the comeback of the show called 'The Walking Dead.' It is no longer being aired as the contract between Dish Network and AMC was not renewed. However, despite this fact, the company wants to see the show back on the air, and decided to devise a creative and memorable scheme.

AMC dressed people up from head to toe in zombie attire, and released them onto the streets; however, the zombies appeared as if they were going about their daily activities. Most of the on-lookers were horrified and confused as to what they were up to, but nonetheless, these spectators were in for a day they wouldn't soon forget.
3.4
Score
Popularity
Activity
Freshness
Attend Future Festival Virtual