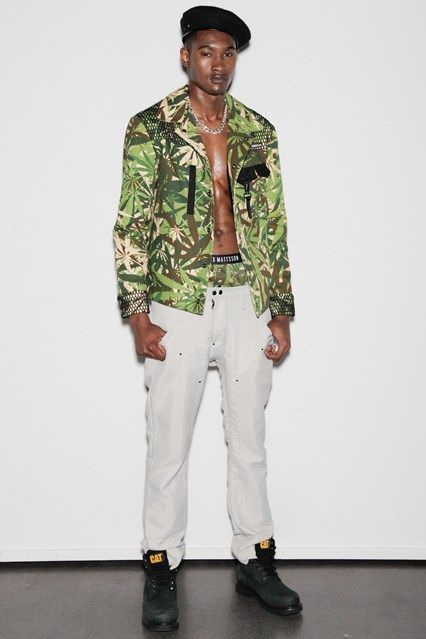 Malika Renee Butss — November 11, 2013 — Fashion
References: idolmag & vogue
Share on Facebook Share on Twitter Share on LinkedIn Share on Pinterest
London-based designer Alex Mattsson has wowed and amazed once again with his latest in menswear, the SS 2014 collection he's rightfully dubbed 'Pineal Dawn.' This new line is far from anything you'd see on a normal runway and that's just what is expected from Alex Mattsson.

While other designs in the fashion universe are broadcasting a more toned down and sophisticated look for men, Mattsson strays far from that crowd of collection. This cutting edge designer manages to pull together a line that is dangerous, rebellious, chic and downright awesome all the while giving it an awesome presentation at the London Film Museum where the world got its first look at this creative collection.

Drawing inspiration from Rastafarian prints, military uniforms and mesh influences, the designer makes this collection powerful and strong no matter what the season. Alex Mattsson wants men to join the movement with the SS 2014 line 'Pineal Dawn' and be super sexy soldiers of style.
3.9
Score
Popularity
Activity
Freshness
Get the 2023 Trend Report FREE