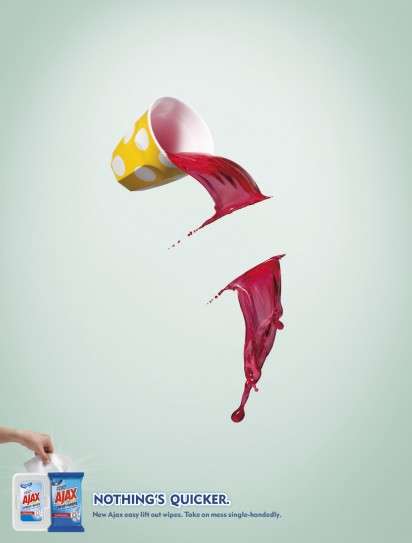 Meghan Young — May 10, 2012 — Marketing
References: yr & ibelieveinadv
The Ajax Spray n Wipe ad campaign shows that there is "nothing quicker" when it comes to cleaning up spills and even intercepting them in midair, as stated in its tag line. Like an expertly executed karate chop, these handy cleaning wipes will stop the mess from getting any worse.

Conceived and executed by Y&R, an ad agency branch based in New Zealand, the Ajax Spray n Wipe ad campaign is simple and direct. The image of a spill swiped right in the middle sends the message loud and clear. The campaign was art directed and copy written by Tony Haigh and Lisa Dupre with creative direction by Scott Henderson. It was designed by Tim O’Neill, photographed by Danny Eastwood and retouched by Cream Studios.
3.5
Score
Popularity
Activity
Freshness