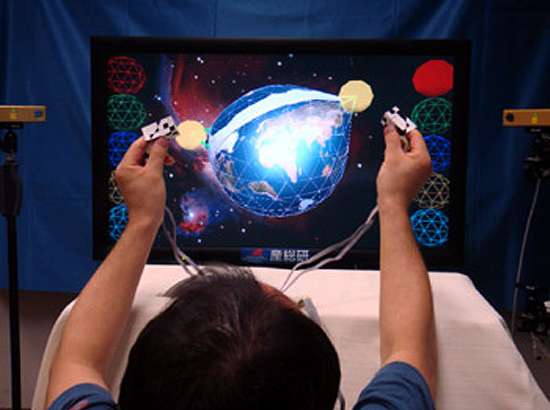 The AIST 'i3Space' Takes the 3D Movement to the Next Level

Meghan Young — August 29, 2010 — Unique
References: techon.nikkeibp.co.jp & dvice
For all you 'Star Trek' fans out there, the halodeck make not be the stuff of sci-fi fantasy for much longer thanks to the AIST 'i3Space.' Making the possibility of touchable 3D experiences closer than ever, it takes the whole new 3D movement to the next level.

Developed by Japan's National Institute of Advanced Industrial Science and Technology, the AIST 'i3Space' is currently being honed for medical use (and, of course, video game industry applications as well). According to Dvice, the AIST 'i3Space' involves attaching "a series of fingertip modules to your hands that offer an illusionary tactile and kinesthetic sense interface allowing you to manipulate 3D imagery."
5.4
Score
Popularity
Activity
Freshness