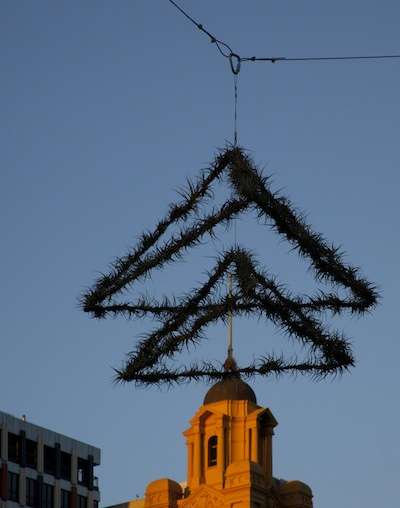 Airborne by Lloyd Godman Adds Greenery to City of Melbourne

Meghan Young — February 19, 2013 — Eco
References: lloydgodman.net & psfk
Airborne by Lloyd Godman is part urban fixture, part art installation. It is a series of elevated geometric gardens that hang above cyclists and drivers alike in the city of Melbourne, Australia. Funded by the city's 2013 Arts Grant, the project offers a unique set of decor that will intrigue as much as it delights.

Made out of recycled bicycle wheels, wires and bromeliad plants, Airborne by Lloyd Godman is the first installation to debut for the Sustainable Living Festival. The gardens, which are self-sustainable since they nutrients from the plants' leaves, spin and rotate as the wind blows. This creates a a whirring visual appeal while adding some some greenery to the otherwise gray, concrete space of the busy city.
3.4
Score
Popularity
Activity
Freshness