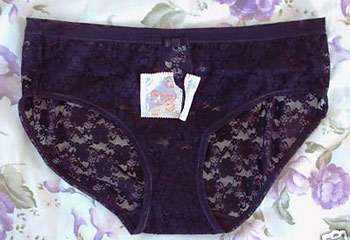 Seller "Anna" found a lacy pair of black underpants "size humongous" and an empty condom wrapper "size small" in her bed after her husband allegedly engaged in an extramarital affair with a woman named Kylie. Of the knickers, she says "They are so huge I thought they may make someone a nice shawl or, even better, something for Halloween perhaps."

The eBay listing, called "Empty condom packet & a photo of The Tart's knickers", also comes with a detailed account of the events leading up to her discovery, in which the woman returned from work to find her husband of 22 years watching a DVD and discouraging her from entering their bedroom.

The listing was first taken down due to eBay's policy against selling secondhand underwear, spokeswoman Inessa Jackson said. "We let her know about the policy and instead she's now selling a photograph of the offending knickers. eBay does connect colourful buyers with colourful sellers and I wouldn't be surprised if someone did buy these items, though I couldn't speculate on who would buy them or why.
This is obviously very therapeutic for this woman and it must be a great channel for her views on cheating and the sanctity of marriage."

More than 2500 have viewed the auction, and with five days to go the listing has also been added to eBay Australia's Best of eBay site.

Anna has also promised future listing, including her husband's Harley Hog "at a start price of 99c and, of course, with no reserve!" Several bidders have already expressed interest in the motorcycle.
4.6
Score
Popularity
Activity
Freshness
View Innovation Webinars

30 Ways to Get Back at a Cheater
Ideas for Sandra Bullock, Like Belligerent Greeting Cards