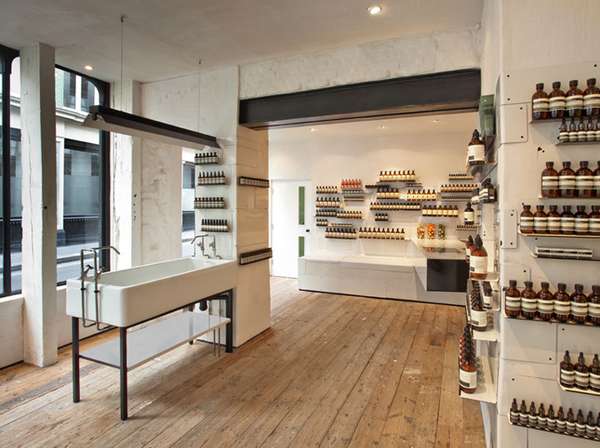 Katherine Vong — January 18, 2012 — Art & Design
References: aesop & retaildesignblog.net
Share on Facebook Share on Twitter Share on LinkedIn Share on Pinterest
The Aesop Soho store, which recently opened in Soho, London, is a place where you will not only find coveted beauty products -- that were used by history's royals, such as Egyptian pharaohs and Persia's kings -- you will also feel comfortable and calm, thanks to its minimalist and monochromatic interior designed by Parisian architecture firm Cigue.

The Australian beauty brand's newest shop rests on a space that was once supposed to be a royal park, as was the wish of Henry VIII. Now, it's a place for luxury hair and body products, which are featured on displays and shelves made of enamel, a material known to last a long time. The displays also provide cool contrast against the Aesop Soho store's natural hardwood floors and white-washed stone walls, while black trim accents the space for a cool and contemporary look.
3.8
Score
Popularity
Activity
Freshness
View Innovation Webinars