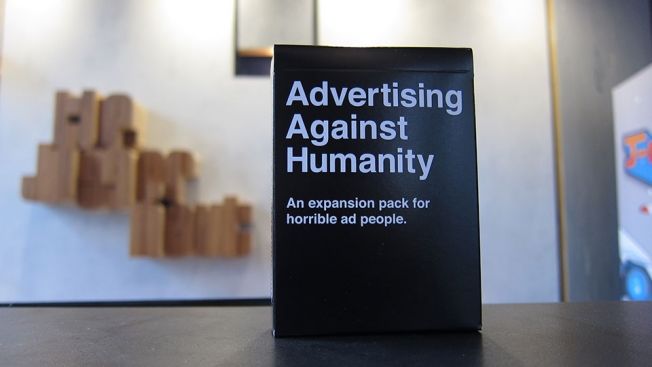 Vasiliki Marapas — December 5, 2014 — Art & Design
References: thejuggernaut & adweek
Canadian design studio The Juggernaut has developed 'Advertising Against Humanity,' an expansion pack of the popular card game Cards Against Humanity geared towards soulless ad execs (isn't that all of them? I kid, I kid). Ironically, the game was written by Travis Cowdy and Lyranda Martin-Evans of KBS+P Toronto, an advertising agency. I guess it makes sense: takes one to know one?

The back of the box reads, "These cards are as despicable and offensive as the advertising industry itself," so at least we know that these "horrible ad people" have a sense of humor.

The Juggernaut is gifting the misanthropic card game this holiday season. Lucky recipients can share their game cards on social media under the hashtag #AdvertisingAgainstHumanity. Shameless!
4.7
Score
Popularity
Activity
Freshness