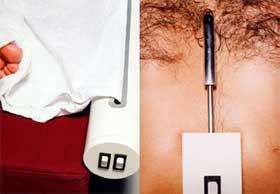 If you can relate, you'll appreciate the Accessories for Lonely Men by Noam Toran, which will solve all that. They include items such as Sheet Thief which is attached to your blankets and rolls them up to simulate her stealing them. Also simulating the domestic environment is the Silhouette Light which resembles a female stretching behind a shower curtain. The Heavy Breather blows hot air on his neck and mimics the sounds of deep breathing. The Hair Alarm Clock wakes him in the morning with simulated long hair whipping him in the face. Cold Feet recreate the feeling of her icy toes under the sheets.

The Chest-Hair Curler winds his hairs for him in the same way a woman might do when laying in bed with him. Shared Smoke is explained as coming "into its own after a solitary sex act." For those men who like a little bit of aggression to get their adrenaline going, the Plate Thrower will hurtle plates across the room.

Accessories for Lonely Men is being featured at the Design and the Elastic Mind exhibit at the Museum of Modern Art in New York from February 24 â€“ May 12, 2008.

Now ladies, it's time for us to get creative. How about Massage Hands, Breakfast-in-Bed Maker, and a Charmer Alarm clock that wakes us telling us how beautiful we are?

Of, one more thing guys, for those other needs she isn't there to fulfill, there's always a range of Fake Intimacy options...