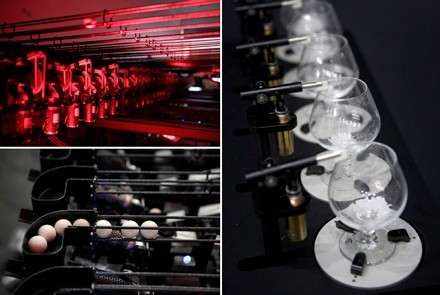 Ayman — February 21, 2008 — Unique
References: blog.makezine & engadget
Share on Facebook Share on Twitter Share on LinkedIn Share on Pinterest
Absolutely, completely and totally amazing! Thank God the inventors described it and provided a video, because I have no words for this awesomeness of a complicated machine. Dan Paluska and Jeff Lieberman have created the "ABSOLUT QUARTET", an "automated multi-instrumental orchestral machine, a large-scale electromechanical sculpture consisting of three instruments and thousands of parts, working together to create one piece of music. The main timbre is a marimba played by balls shot from a robotic cannon. Other components include a series of wineglasses played by little robotic fingers and an array of robotic percussive instruments".