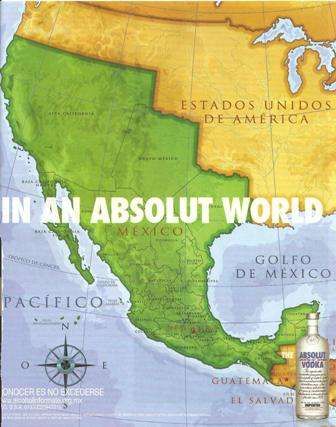 It features a skewed Mexican border, showing a huge chunk of the southern part of North America as part of Mexico. Some people love it, and some people hate it, as can be seen from the comments on Laura Martinez' blog.


"!Que verguenza, Absolut! Shame on Absolut!" one person wrote. "Their PR Director will be hearing from this former customer, manana. It's not even shaped like the bottle, for Pedro's sake!"

"Wow, this post really brought the crazies out of the woodwork," another said. "Take heart, white supremacists! I think what Absolut is saying is that, even if Mexico were to take back all her territory, English would still be the lingua franca of marketing and advertising. You won't even have to 'press 1' for it."

"Just the way ads are tailored to pump 'USA rocks' or any other ad for that matter, this is for a different demographic hence being published in Mexican magazine," another poster commented.

"Now i know this is hard for some of you to understand but it's an AD! Not a call for revolution, not kill the â€œwhite manâ€ campaign, not any of those things. It was simply taking history and placing it in a different text for an AD!"

On a lighter note, he's some less controversial Absolut advertising: