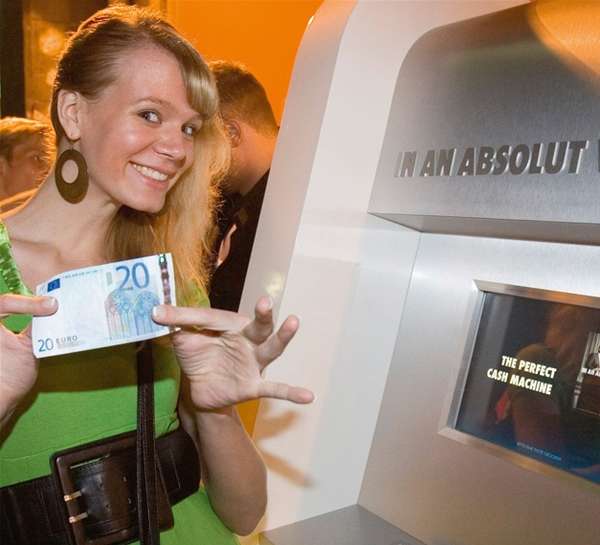 Ayman — May 11, 2008 — Marketing
References: adsoftheworld
Share on Facebook Share on Twitter Share on LinkedIn Share on Pinterest
As part of its massive â€œIn an Absolut Worldâ€ campaign, Absolut Vodka went beyond the typical media of tv spots, print ads and billboards with an Absolut Cash Machine. They wanted people to experience the Absolut World first hand in a creative and unexpected way.

Working with TBWA ad agency in Berlin, they introduced a â€œhappy hourâ€ at ATMs during which people received money for free! Now, wouldn't you want to live in such a world?

The campaign was naturally very successful, yielding the longest lines ever seen at these cash machines. In total, 12,000 Euro were given away for free. In return of this moderate investment, Absolut Vodka recieved huge amounts of news coverage in TV, press, online and by word of mouth. It is estimated that the witty campaign generated more than 1.5 million media contacts. A big return on such a small investment I would say!

Check out some of the â€œin an absolut worldâ€ campaigns featured in Trend Hunter: