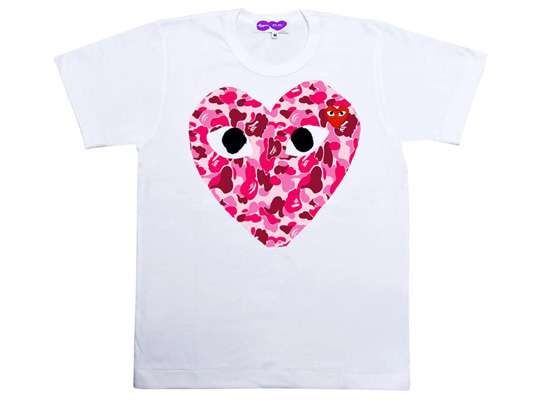 When the A Bathing Ape x Commes des Garcon 'PLAY' collection was announced last week, the blogosphere was buzzing. Many streewear fans were eager for a glimpse at the collaboration. Today, first look images of the series were released, and it's shaping up to be an highly sought-after collection. The t-shirt series has many staples:the Commes des Garcon "heart" logo, the Bape camouflage colorway and Baby Milo, Bape's flagship mascot. Most of the tees in the series are crisp white, offset by famous logos of the two Japanese brands. One standout item from the collection is the PLAY heart logo blended with Bape's signature pink camo colorway.

No word yet as to when this collection will drop.
4.6
Score
Popularity
Activity
Freshness
Get Better and Faster