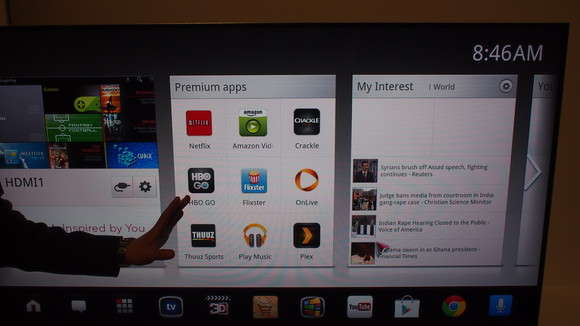 Jonathon Brown — January 8, 2013 — Tech
References: techradar
Share on Facebook Share on Twitter Share on LinkedIn Share on Pinterest
At its Consumer Electronics Show press conference today, LG unveiled a slew of new products including the 55-inch Google TV (also known as the GA7900). Of course, this isn't the first Google TV on the market from LG, but it is a new, revamped version.

This version of the 55-inch Google TV includes a Bluetooth remote that also doubles as a keyboard when it's flipped over. The remote is designed to move around the screen much like a mouse, which is a move to bring the computer functionalities closer to the TV experience.

One of the coolest features of Google TV is the option for voice searching. Once enabled, users simply speak to the television to find what they're looking for. The 55 inch Google TV comes with the OnLive app pre-installed, Cinema 3D functionality and dual-core CPUs.
3.2
Score
Popularity
Activity
Freshness
Jeremy Gutsche Keynote Speaker