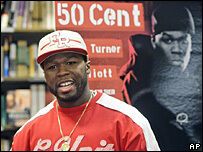 50 Cent has co-written a series of novels featuring characters based on members of his G-Unit crew. The books' themes are similar to those of this songs. According to publishers MTV and Pocket Books, "These tales will tell the truth about 'the life'; the sex, guns and cash; the brutal highs and short lives of the players on the streets." The titles include Death Before Dishonor with the tagline "One Reason to Live. Three Reasons to Die." In true literary style, 50 even held a book signing in New York. (I'm betting the Borders bookstore has never seen so many metal detectors before.)

These guys are money making machines. From the records to the films to the clothing lines, and now novels, they just keep finding new ways to leverage and sell their image.
2.9
Score
Popularity
Activity
Freshness
Get Trend Hunter Dashboard