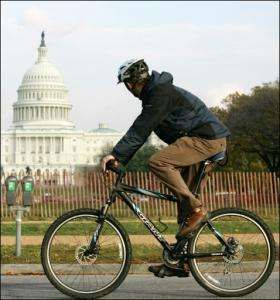 It's the first bicycle sharing program in the U.S. and works similar to the Zipcar service. With the swipe of a card, members will be able to rent one of 120 bicycles on the spot, day or night. They'll be available at 10 locations in Washington. With rising gas prices and an increased awareness on the hazards of car pollution on the environment, it's about time a service like this was offered.

"For a $40 annual membership fee, SmartBike users can check out three-speed bicycles for three hours at a time," the NY Times says. The low price is possible thanks to it being subsidized by advertising. If all goes well, they hope to bump the number of available bikes up to 1,000.

Read more about the Velib program in Paris and Biking in Barcelona: