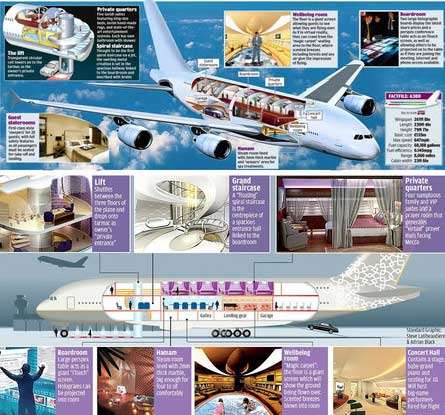 This comic-book style illustration shows you a detailed sketch of "the world’s most luxurious private jet, adding to its prior claim of being the biggest," as New Launches called it.

This is no plane for a cartoon heiress like Veronica Lodge -- this beautiful flying mansion is real as can be. Who knows? Maybe Paris Hilton will even use it to host the ultimate party in the sky, and if she does, we're pretty sure she'll make good use of the built-in Rolls Royce parking space.

The $300 million private jet -- which can accommodate 600 passengers -- has a steam room, a Wellbeing room, and a boardroom with iTouch screen table! It also has spiraling stairs, lavish guest rooms a plenty and even a concert room for the really rockin' in-flight entertainment.
1.1
Score
Popularity
Activity
Freshness
Get the 2021 Trend Report FREE