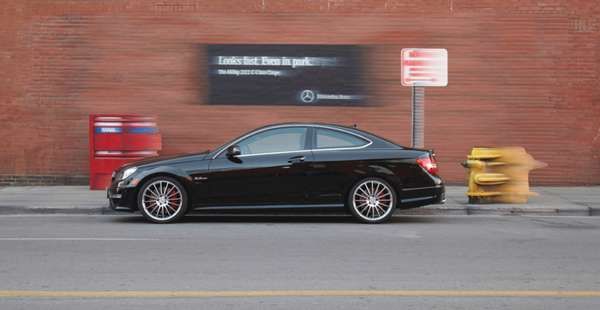 Meghan Young — November 17, 2011 — Autos
References: bbdo & mymodernmet
Share on Facebook Share on Twitter Share on LinkedIn Share on Pinterest
Car commercials and print ads tend to focus on the motion of the automobile it is advertising, so it should only be natural that someone would think up the same thing for a publicity stunt such as the one involving the new 2012 Mercedes-Benz C-class Coupe. Since everyone loves a good optical illusion, this is definitely a two-fold campaign winner.

Cleverly conceived and expertly executed by BBDO, an ad agency based in Toronto, Ontario, the 2012 Mercedes-Benz C-class Coupe ad campaign centers around a parked 2012 C-class Coupe. Although parked, it appears to be driving at top speed thanks to the strategic use of 3D models of a motion blurred fire hydrant, mailbox, parking sign and billboard ad, which of course is about the Mercedes-Benz before it.
5.3
Score
Popularity
Activity
Freshness
Get Trend Hunter Dashboard