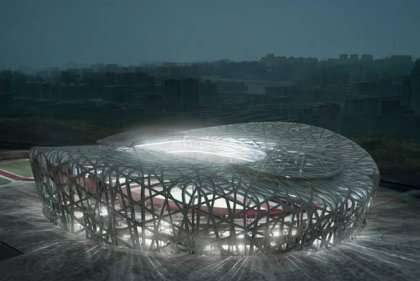 Bianca — September 2, 2007 — Art & Design
References: funforever.net
China is booming with new architecture and a mad scramble to get the city fit to play host to next summer's Olympics when Beijing will host the XXIX Olympiad. The games are less than a year away (August 8, 2008 to August 24, 2008), causing a mad scramble for the city's big debut in the international public eye.

The "bird's nest", as the new Beijing National Stadium has been dubbed, is where the opening and closing ceremonies will take place as well as track and field events. The stadium "will seat 100.000 spectators during the Olympics in August 2008. After the games the number will be reduced to 80.000. The stadium is 330 metres long by 220 metres wide, and is 69.2 metres tall."

The main image shows the Beijing Natioanl Stadium while the rest of the gallery shows some of the elaborate designs that were rejected.
3.9
Score
Popularity
Activity
Freshness