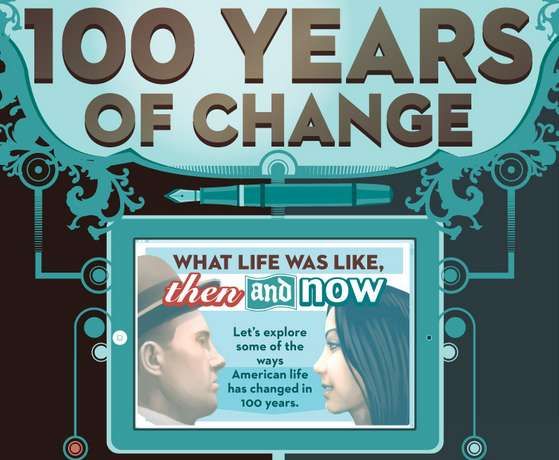 Jennifer Gosnell — June 29, 2013 — Lifestyle
References: visual.ly & bitrebels
Share on Facebook Share on Twitter Share on LinkedIn Share on Pinterest
The '100 Years of Change' infographic arrives just in time for the July 4th Independence Day celebrations. Taking a look at the differences between the year of 1913 and 2013, this infographic indicates some major cultural changes and areas that have improved, as well as those that haven't, for the American people.

With unemployment higher today than it was 100 years ago, the graphic suggests that economically Americans are struggling slightly more than 100 years ago on this front. However, with over a three-fold population increase in population size, altogether more people are employed in the modern day than a century ago. Further, with a life expectancy jump from 52.65 years to 78.2 years, we can assess that the American medical association is on to something and that with this life span expansion news there are many areas of society that have made major leaps forward.
3.7
Score
Popularity
Activity
Freshness
View Innovation Webinars