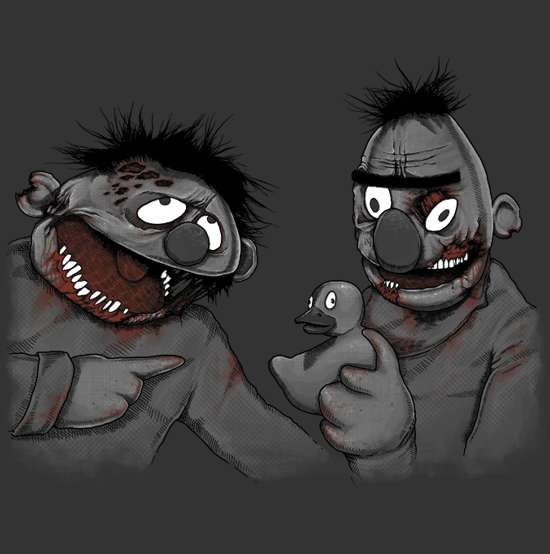 The Zombert & Zernie T-Shirt is Not for Children

Matt Ho — August 14, 2011 — Pop Culture
References: 604republic & theawesomer
Most people grew up watching Ernie and Bert on Sesame Street, so they're going to be in for a shock when they see the Zombert & Zernie T-shirt.

People usually try to imagine what it would be like if a zombie apocalypse hit the world, but what about if it hit Sesame Street? The Zombert & Zernie T-shirt shows what it'd be like if two of the most beloved characters on the show were infected. The result? Flaking skin, blood on the shirt and eyeballs falling apart -- not a great sight of the two characters that generations of kids have watched over the years. In fact, if you've ever said that Bert and Ernie were the characters you'd least expect to be intimidated by, this shirt will change your mind.
4.5
Score
Popularity
Activity
Freshness