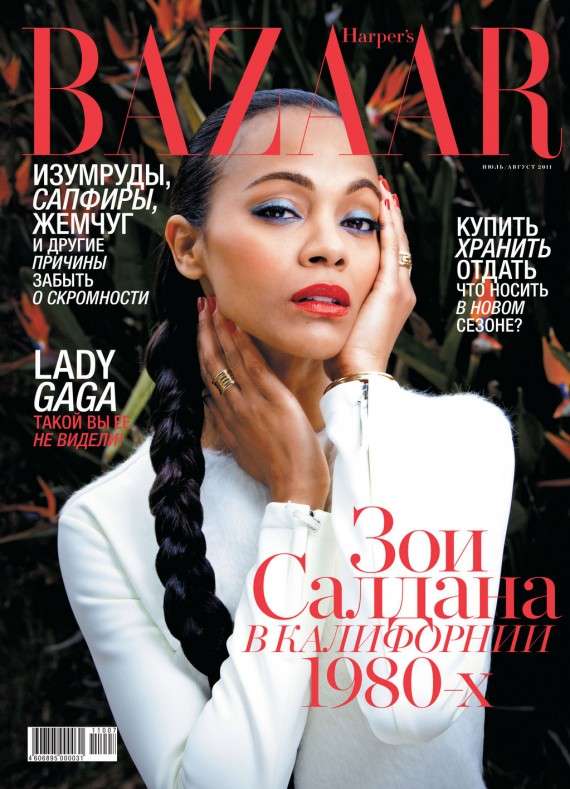 Corinne Guirgis — June 26, 2011 — Pop Culture
References: fashiongonerogue & cocoperez
Share on Facebook Share on Twitter Share on LinkedIn Share on Pinterest
High-class, luxurious and natural all at the same time, the Zoe Saldana Harper's Bazaar Russia cover and editorial shows the Avatar star all grown up. Following the rampant success of Avatar, Saldana became a hot-ticket item in the fashion world with her naturally striking beauty and the air of classiness she maintains at all times.

The photo shoot has the actress out in the wilderness, showcasing some exotic yet familiar landscapes that complement her effortlessly beautiful face. Though the styling in the shoot maintains an upscaled elegance that contrasts the wild setting, no element in the shoot appears out of place. Shot by Katie Bleacher and Dean Everard, Saldana is sporting the stylings of Natalia Alaverdian, including pieces from Gucci, Oscar de la Renta and Dolce & Gabbana.

Implications - The regular use of celebrated U.S. stars in international editorials speaks to the widespread influence of American popular culture on a global scale. Audiences and consumers around the world who have been exposed to mass produced films, images and music from the Western world are equally as influenced by and consumed with the celebrity culture that is associated with them.
1.7
Score
Popularity
Activity
Freshness
View Innovation Webinars