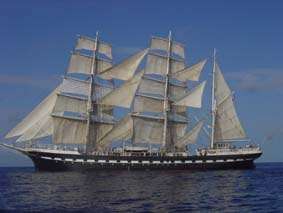 Wessley Murylo — April 28, 2008 — Lifestyle
References: creatingexcellence.blogspot & nzherald.co.nz
Share on Facebook Share on Twitter Share on LinkedIn Share on Pinterest
This month, 60,000 bottles of wine from the southern Languedoc region of France being to Dublin, Ireland in a 19th-century barque, saving 8.324 kg (18,375 lb) of carbon, an estimated 140 grams (4.9 oz) of carbon per bottle, compared to the regular mode of shipment.

The 52-metre (170-feet), three-mast sailboat, which was launched in 1896 to bring cocoa and sugar to France from BelÃ©m, the gateway to the Amazon in Brazil, is the last French merchant sailing vessel and will sail to Dublin after a four day voyage from Bordeaux.

Each bottle carries a label with a stylised ship logo and the slogan, "Carried by sailing ship, a better deal for the planet".

The greenness of the project does not stop with the delivery of the wines.

The ship will bring an equivalent tonnage of crushed glass to France for wine bottle recycling. This will result in cheaper bottles and a better supply given the current problems some vineyards have getting enough bottles.