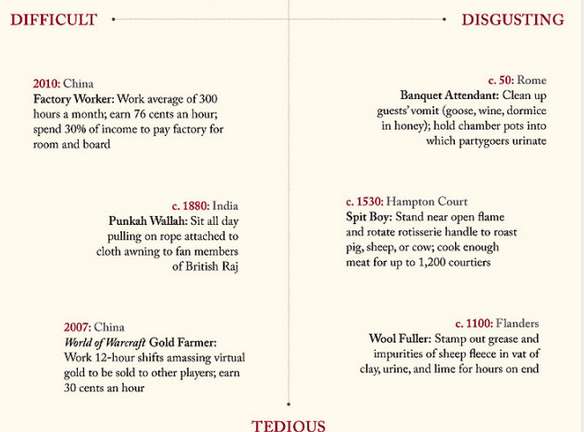 Lapham Quarterly's Analyzes the Worst Ways to Earn a Livelihood

— June 14, 2013 — Pop Culture
References: laphamsquarterly.tumblr & lostateminor
Share on Facebook Share on Twitter Share on LinkedIn Share on Pinterest
The new infographic from Lapham's Quarterly places the world's worst jobs on a matrix that extends from 'difficult' to 'disgusting' to 'treacherous.' When reading the infographic, each job sounds worst than the last. Some were only started a few years ago, like a subway pusher from Japan, who is responsible for pushing rush-hour commuters onto crowded subway cars. Others have been around as early as the year 50, like the banquet attendant from Ancient Rome -- this poor guy was responsible for cleaning up after party guests who, in Ancient Rome, were notorious for vomiting their food in order to consume more. Banquet attendants were also responsible for holding chamber pots into which intoxicated banquet-goers would urinate.

After looking through these terrible, disgusting and often dangerous jobs, it's easy to appreciate the nice, cushy office jobs that so many people complain about. If a cubicle job ever seems hellish and soul-crushing, just think about those poor banquet attendants, who never had a vomit-free day in their lives.
1.9
Score
Popularity
Activity
Freshness
Get Trend Hunter Dashboard