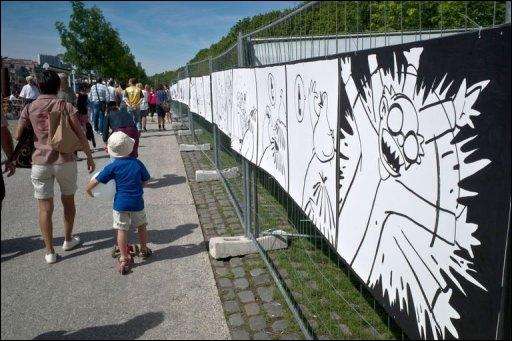 The World's Largest Comic Spices up Your Tourist Experience

Corinne Guirgis — May 30, 2011 — World
References: lepost.fr & odditycentral
Share on Facebook Share on Twitter Share on LinkedIn Share on Pinterest
The Guinness Record was just set for the world’s largest comic along the banks of the Rhone River in Lyon, France. The comic, which took a team of 11 writers and 111 designers to complete, is one kilometer in length. The comic needed to be completed in under 24 hours in order to count for the world record and with committed and diligent teamwork, this was achieved. The comic doesn’t contain any words or color, but the script and storyline are simple enough for a general public to understand.

According to Oddity Central, “It tells the tale of a shaggy Tarzan-like character, with a passion for drawing, who discovers the ways humanity has invented to represent itself.”

Passers-by reactions have been very positive. “It’s nice to walk while reading. We could go on like this ten kilometers,” a young woman said while her six-year-old daughter was busy checking out the artwork.

What a brilliant and creative way to make a very popularly-walked path for tourists more interactive and exciting, especially for all those young children who tire easily when travel with their parents!
0.7
Score
Popularity
Activity
Freshness
Get Trend Hunter Dashboard