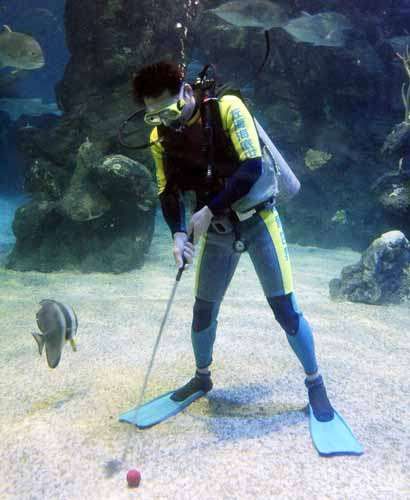 Justin Good — May 16, 2007 — Lifestyle
References: weirdasianews
Share on Facebook Share on Twitter Share on LinkedIn Share on Pinterest
Remember Underwater Hockey? Well, now China has staged what is believed to be the world's first underwater golf tournament. The event took place at the Zuohai Aquarium in Fuzhou city which is in Fujian. The game involved five players who golfed around in a 50ft deep tank.

"â€œThe rules are pretty much the same as for regular golf. Whoever gets the ball in the hole first wins the match,â€ an aquarium spokesman told the People's Daily.

But players were judged on how long it took them to complete the hole rather than the number of strokes taken.

â€œThe water makes the match very interesting. Not only fish and mammals distract the players, but their buoyancy makes it hard for them to stabilise themselves.â€

Water currents also make the trajectory of the ball hard to predict, he added.

The winner sunk the ball in just one minute and 20 seconds, while the one who came last took five minutes."