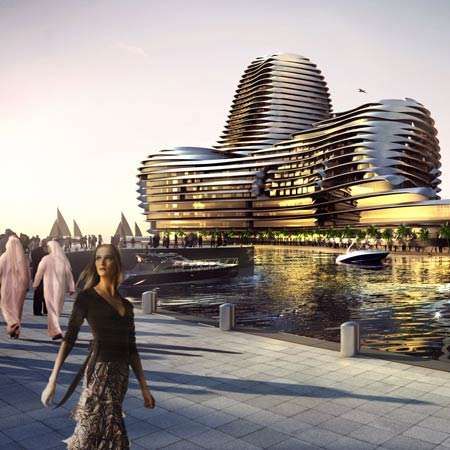 Everything that can be housed in a city building will be in this spectacular piece of architecture by Foster + Partners. This is their start toward a strong environmental strategy for their structures.

"The Abu Dhabi World Trade Center is a multi-use building that brings together offices, apartments, a hotel and shops to encourage a constant pattern of economic and social activity throughout the day," Dezeen explains.

"Wrapped in a shimmering skin, the building's sinuous form rises up to a tower at its eastern tip. This distinctive envelope is a reactive louvered shading system that is angled to minimize solar gain depending on orientation. The main entrance to the south connects to a soaring central atrium, which is buffered from the climatic extremes by the apartments and offices that line the perimeter."

The stunning images seen in the gallery were revealed this week at the MIPIM property fair in Cannes. Construction is set to begin early this summer.
5.5
Score
Popularity
Activity
Freshness
View Innovation Webinars