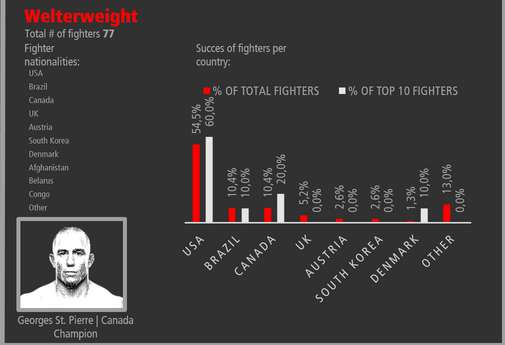 In the World of UFC, Where Do the Most Fighters Originate?

Jonathon Brown — February 17, 2013 — Lifestyle
References: dgisenra.nl & visual.ly
Share on Facebook Share on Twitter Share on LinkedIn Share on Pinterest
This infographic looks at the world of UFC to determine where the fighters actually come from. The most successful country at producing UFC fighters is the United States, which is no surprise since the UFC started in that country and does most of its business there.

Across all weight classes (flyweight, bantamweight, featherweight, lightweight, welterweight, middleweight, light-heavyweight and heavyweight) Brazil consistently produces the second most fighters in the world of UFC. The number of fighters from Brazil doesn't exactly compete with the United States in terms of volume of fighters, but it does have a high proportion of the top ten fighters in the world.

And according to this infographic, Canada ranks third out of dozens of countries.
2.7
Score
Popularity
Activity
Freshness
Access Advisory Services

Informative Vaccination Infographics
The ‘Do I Need a Flu Shot?’ Chart Encourages Read