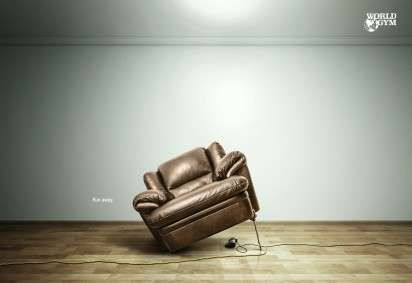 The World Gym 'Run Away' Campaign Encourages People to Get Fit

Meghan Young — April 17, 2013 — Marketing
References: facebook & ibelieveinadv
Share on Facebook Share on Twitter Share on LinkedIn Share on Pinterest
The World Gym 'Run Away' ad campaign encourages lazy and unfit people to get their act together by setting up unique traps around the house. As though trying to capture a large animal, these traps are quite primitive. Nevertheless, they send a strong message as to who they are appealing to. From televisions suspended over a tub of popcorn to an armchair tilted over a video game control, the images signal a big change to come.

Conceived and executed by 9mm Propaganda, an ad agency based in Florianópolis, Brazil, the World Gym 'Run Away' ad campaign was art directed by Ramiro Pimentel with creative direction by Alexandre Guedes. The scenarios, which are at once hilarious and serious, were illustrated by Mano Pimentel while the simple copy was written by Anderson Nascimento.
4
Score
Popularity
Activity
Freshness
Get Better and Faster