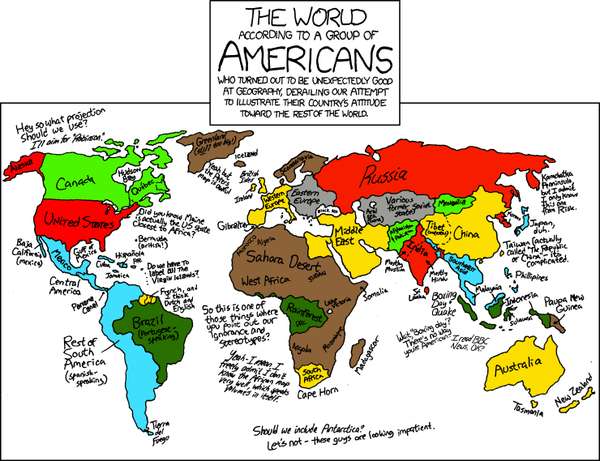 The World According to Americans Defies Stereotypes

Susan Keefe — October 14, 2011 — Pop Culture
References: xkcd & holykaw.alltop
Share on Facebook Share on Twitter Share on LinkedIn Share on Pinterest
The World According to Americans graphic from 'xkcd' is not what it appears at first glance. If you live outside the U.S, you were likely expecting a slew of knee-slapping jokes at the expense of the Yanks, but this cute map of the world defies American stereotypes with a fairly accurate rendition of global geography. Most of the world thinks they have Americans all figured out. Many people comment on their ignorance about the rest of the world and their intolerant inclinations, but in doing so, those who criticize are guilty of the same charge.

The writers of the site 'xkcd' asked a group of random Americans to recreate the world's geography as best they could off the top of their heads. All of you who used to have night terrors about geography finals know this is not an easy task. The people of 'xkcd' preface the graphic with an explanation stating, "It's not our fault we caught a group on their way home from a geography bee."

The World According to Americans defies the long held belief that Americans know nothing about the world outside much to the chagrin of the keepers on 'xkcd'.
4.7
Score
Popularity
Activity
Freshness
View Innovation Webinars