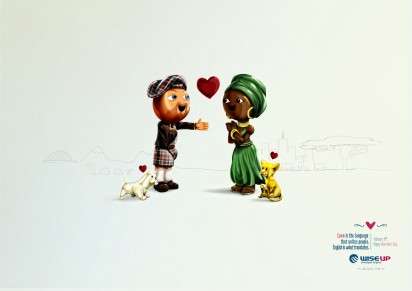 Meghan Young — February 11, 2013 — Marketing
References: ibelieveinadv
Share on Facebook Share on Twitter Share on LinkedIn Share on Pinterest
The tag line of the Wise Up English School ad campaign sums it up perfectly, "Love is the language that unites people. English is what translates." Although it might seem a little pretentious to assume that English is the universal language, it is hard to deny. At the end of the day, the campaign sends a positive message that people from different parts of the world can connect on deeper levels thanks to language lessons.