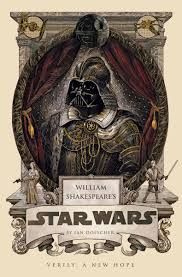 Meghan Young — February 26, 2014 — Business
References: iandoescher & swipelife
Share on Facebook Share on Twitter Share on LinkedIn Share on Pinterest
As perhaps the most celebrated writer of all time, it is only natural that Shakespeare's signature style would be embraced in a modern manner as is the case with the recently published 'William Shakespeare’s Star Wars' trilogy. Having hit stores last year, the last instalment of the series has since been published, 'William Shakespeare’s The Empire Striketh Back.'