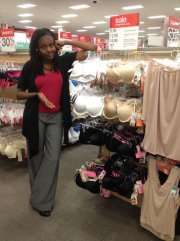 Katherine Vong — January 31, 2012 — Marketing
References: news.yahoo & huffingtonpost
After learning that her mother and family members were dyeing their bras brown to match the color of their skin, 31-year-old Tara Raines launched a campaign on Facebook called 'What's Your Nude?' to encourage bra manufacturers to provide more color options for black women.

Traditional "nude" bras have been made in varying shades of blush, buff and off-white, but none of these colors represent the darker skin color of millions of women around the world. These women are also willing to spend the money if they are able to find the right bra. As Raines notes, "Women of color have tremendous spending power in the U.S. and it's absurd to think that in 2012 we are essentially disenfranchised when we shop for lingerie. It's my hope that this campaign will drive not only awareness, but swift action by bra makers."

While creating a shade for every skin tone out there would be near to impossible, HuffingtonPost states that even offering one brown shade is a good start. Supporters of the 'What's Your Nude' campaign can visit its Facebook page, click 'Like' and contact their favorite bra makers to spread the message.
3
Score
Popularity
Activity
Freshness