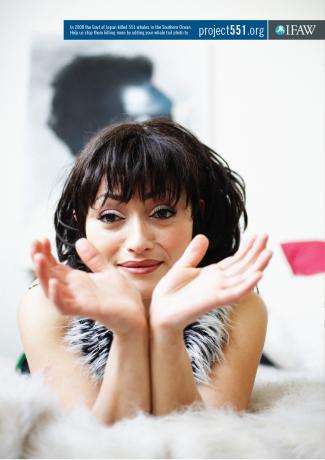 Elsa Blaine — August 11, 2008 — Eco
References: project551.org & adsoftheworld
Project 551 is a web based awareness project to, â€œshow just how many people support whales and want to see an end to whaling.â€

The name of the project, founded by the International Fund for Animal Welfare (IFAW), is rooted in the fact that 551 whales were killed last season by the Government of Japan in the Southern Ocean Whale Sanctuary last season alone.

Founded in 1969 in Canada, the project has more than 2 million supporters and a , â€œglobal team of campaigners, legal and political experts and scientists works to reduce the commercial exploitation of wildlife; preserve vital habitats; protect cats and dogs; and provide emergency relief to animals in crisis.â€

The IFAW is looking for support for whales by uploading a picture of yourself with your hands forming the shape of a whale's tail. The images will be used in TV commercials, posters and a 'Big Book', a â€œwhale sizedâ€ book of photos. The 'Big Book' will be given to the Australian government to encourage its ongoing opposition to whale hunting. So, you can support a good cause and maybe have a cute picture of yourself published.

Images 1, 3, 5 and 6 are from official IFAW campaign posters, the others are wonderful images of supporters of Project 551.

Below is another whaling awareness campaign.