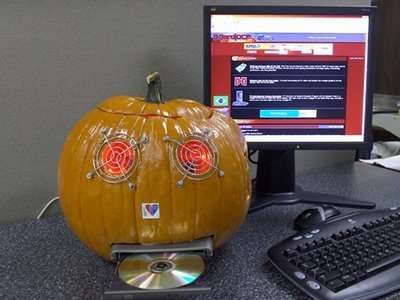 Perfectly timed is the pumpkin case. The CD-ROM drive looks like its tongue when it is in the 'eject' position.

Some high tech fans created the 'Digg' community mod, while other computer users are so disgusted with their PCs, that to them the case resembles an overflowing toilet.

Robot fans will go for the R2D2 complete with 2 two CD/DVD drives, a pop-up WebCam and multiple USB ports as well as the Atlas Battle Bot. The weapon of mass destruction really does look like a bomb ready to go off.

Other fan mods include the car dashboard PC case and the John Deere gas pump whose pump lever operates the power button. One clever mod is the microwave PC case which lets you surf, but not serve, food.

Some of the modifications camouflage the computers so well that the new cases have to be turned around to see the tell-tale parts. Like the old fashioned dial up phone box.
5.1
Score
Popularity
Activity
Freshness
Attend Future Festival