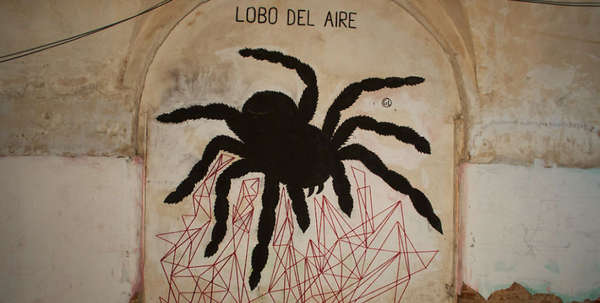 Amanda Greer — July 27, 2013 — Art & Design
References: spidertag.wordpress & lostateminor
Spanish street artist SpiderTag's web-like art is simultaneously creepy and awesome. SpiderTag uses a combination of paint and thread to produce his stunning creations, one of which is a gigantic black spider in the middle of a crumbling, stone wall. The spider looks so realistic, that passersby might think they had accidentally stumbled into some sort of long-legged nightmare.

SpiderTag's other creations demonstrate his web-like style more clearly than the spider. One mural shows a man's silhouette, painted in black, struggling to get away from some sort of creature. He's held, however, by a bunch of red thread, snaking along the wall and keeping him from running away. The web-like structure of the thread enhances the spidery feel of the art, making it clear why the artist has given himself the handle, SpiderTag.
2.9
Score
Popularity
Activity
Freshness