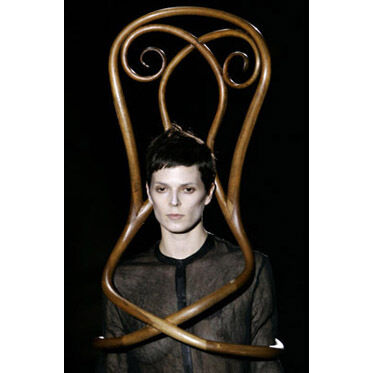 From the Thoneteando series came the PrÃªt-Ã -Thonet idea. PrÃªt-Ã -Thonet is a metaphor for chairs you can wear or wearable chairs.
For the first time they appeared on a catwalk as part of the 2007 Autumn / Winter fashion show of David Delfin and stylist MalaguÃ¨ne.
For the second time they will appear in the presentation of the Spring / Summer Fashion collection of Martin Churba, titled Tropico, on August 21, 2007 in Buenos Aires, Palacio del Correo Central, Samiento 151.

Finally there is the LuThonetteries exposition in celebration of a 40 years celebration of a group of Lute players from August 16 - September 16, 2007. Location:Centro Cultural Recoleta (CCR),
Junin 1930, Buenos Aires, Argentina.
3.3
Score
Popularity
Activity
Freshness
Get the 2021 Trend Report FREE