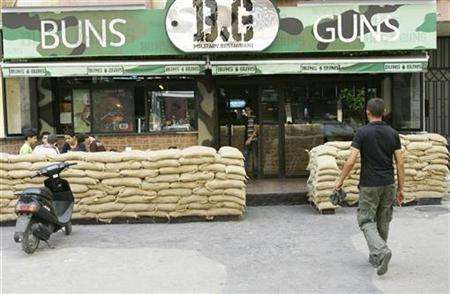 "Buns and Guns" in Beirut

The fast food restaurant, a favourite among teens, has staff in military fatigues serving up fare like the "Kalashnikov" sandwich.

The strangest part of it is that co-owner Ali Hammoud says the theme has nothing to do with Lebanon's history, and was just an innovative concept he hadn't seen applied at any other establishment.

"It's just an idea I had, nothing more, nothing less. I could have put toys in place of the sandbags and teddy bears instead of guns. But it was just an idea," Hammoud told Reuters.

"You could say that the situation in the country made people pay attention," added Hammoud.

On the bright side, the adrenaline rush patrons will get could help rev up their metabolisms, helping to shed the extra fast-food pounds they ingest.
3.8
Score
Popularity
Activity
Freshness
Get Trend Hunter Dashboard