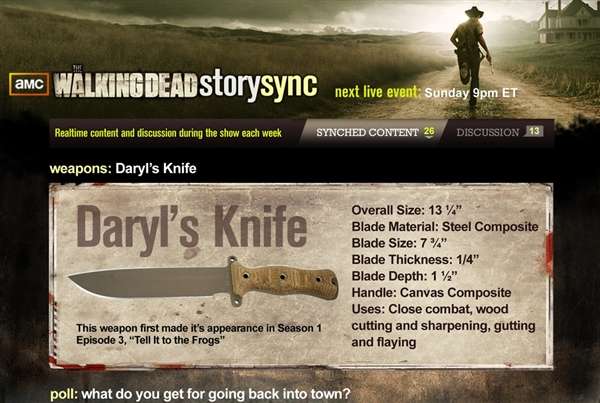 Sarah Moore — February 13, 2012 — Tech
References: theclicker.today.msnbc.msn
Share on Facebook Share on Twitter Share on LinkedIn Share on Pinterest
'The Walking Dead Story Sync' is a web-based application, available for use on computers and tablets, that allows viewers to vote on polls, view screen shots from the episode, answer trivia, keep tabs on the week’s “kill-count” and connect with other viewers in real-time while watching the episode. AMC’s smash-hit The Walking Dead aired its mid-season premiere on February 12 complete with a slew of interactive, supplementary, online content.

The only thing Story Sync does not offer is live-sync during commercial breaks, leaving viewers on their own to keep occupied during advertising segments.

AMC may not be the first television network using online content to enhance the viewing experience, but it is one of the first to use it in such an extensive and interactive way. With the increasing popularity of tablet and web-app use, along with loyal fans constantly craving more information on their favorite shows, other networks will undoubtedly be following suit with something similar to The Walking Dead Story Sync in the future.
2.8
Score
Popularity
Activity
Freshness
Access Advisory Services