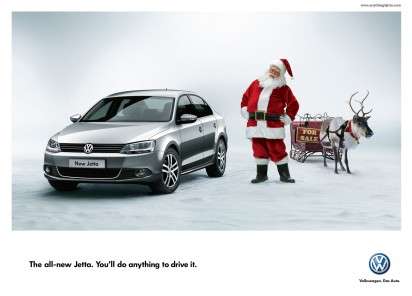 Meghan Young — October 21, 2011 — Autos
References: tribalddbindia & ibelieveinadv
The Volkswagen Jetta is such a sweet ride that it even has Santa Claus considering ditching his famous sled and reindeers for it. Hell, even a Sumo wrestler is willing to lose weight for it, compromising his own livelihood in the process. Of course, these images simply illustrate one thing: "You'll do anything to drive it," or so the Volkswagen Jetta ad would have you believe.

Conceived and executed by India-based ad agency DDB India/Mudra group, the Volkswagen Jetta ad campaign is simple, yet clever, not to mention rather timely. Although many people have Halloween on the brain, the image of Santa Claus will certainly bring Christmas to mind and possibly the idea of treating oneself to a special Christmas gift.
2.2
Score
Popularity
Activity
Freshness