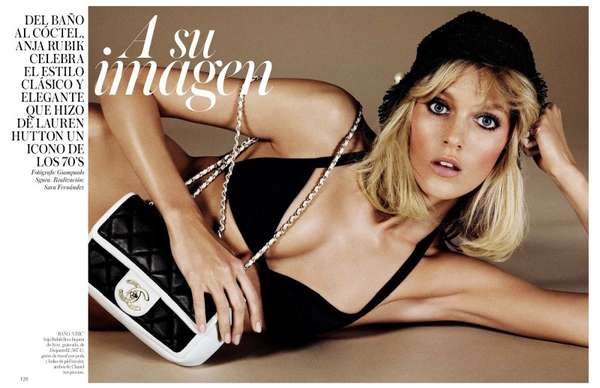 Meghan Young — May 28, 2013 — Fashion
References: vogue.es & fashiongonerogue
The Vogue Spain 'A Su Imagen' cover shoot might be channeling the 70s, but instead of focusing on psychedelic prints and other funky details, the looks embrace the more subtle and sophisticated side of the retro decade. In fact, the title means 'In his image' in Spanish, which alludes to a masculine influence as well.

Shot in studio against a basic backdrop, the Vogue Spain 'A Su Imagen' is set to appear in the June 2013 issue of the magazine. It was captured by photographer Giampaolo Sgura. Model Anja Rubik was outfitted by stylist Sara Fernández. Fernandez clad the Polish beauty in vintage-inspired pieces from such labels as Valentino, Saint Laurent and Oscar de la Renta.
4.6
Score
Popularity
Activity
Freshness