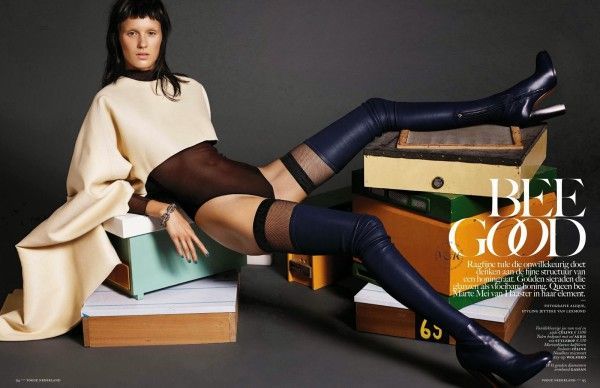 Meghan Young — November 6, 2013 — Fashion
References: vogue.nl & trendland
Share on Facebook Share on Twitter Share on LinkedIn Share on Pinterest
The title of the Vogue Netherlands 'Bee Good' editorial is not a typo. Instead, it accurately alludes to the inspiration behind the edgy looks featured throughout. Although not the typical attire for a professional (or even amateur) apiarist, the looks are clearly influenced by the profession and, more directly, the species. From black and yellow colorways to mesh hats and honeycomb patterns, this influence is undeniable.

The Vogue Netherlands 'Bee Good' editorial stars model Marte Mei Van Haaste, who is the perfect Queen Bee. With her regal look, which was perfected with barely perceivable brows and blunt bangs, she does the outfits absolute justice. Captured in studio by photographer Alique, the contemporary looks were put together by stylist Jetteke Van Lexmond, who pulled pieces from the likes of Celine, Gucci and Balmain.
4.1
Score
Popularity
Activity
Freshness
Jeremy Gutsche Keynote Speaker