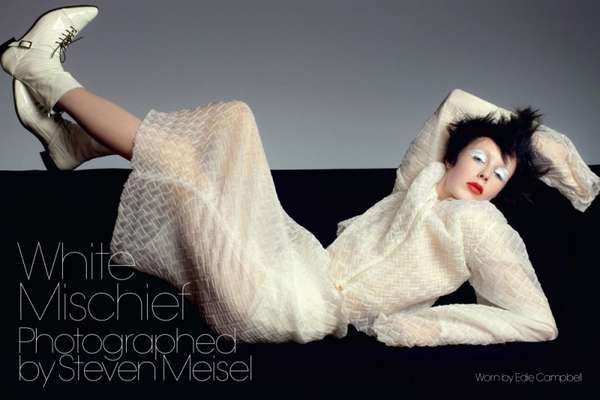 Meghan Young — April 11, 2013 — Fashion
References: vogue.it & fashiongonerogue
Share on Facebook Share on Twitter Share on LinkedIn Share on Pinterest
The Vogue Italia 'White Mischief' editorial is at once clownish and punk, two stylistic concepts that appear separate at first but are in actuality strongly related. By dumbing down the clown element and heightening the punk one, the looks find a medium that many people will be attracted to. It helps that the palette is devoid of color, simplifying the outfits immensely.

Shot by photographer Steven Meisel, the Vogue Italia 'White Mischief' editorial appears in the April 2013 issue of the magazine. It stars model Edie Campbell. Fashion editor Karl Templer styled the British beauty in a range of alabaster designs from the likes of Prada, Celine and Burberry Prorsum. The looks were perfected with a pallid complexion, creative eye makeup and a messy short coif.
3.8
Score
Popularity
Activity
Freshness
Access Advisory Services