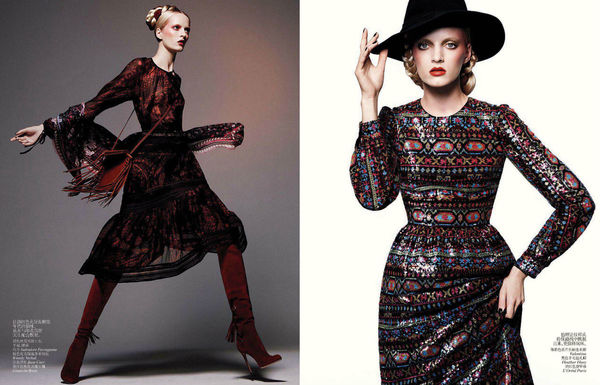 Meghan Young — September 20, 2012 — Fashion
References: vogue.cn & latestfashioneditorials
Share on Facebook Share on Twitter Share on LinkedIn Share on Pinterest
The Vogue China 'Neo Folk' editorial is inspired by country-like attire that has been given a contemporary facelift. From vibrantly patterned frocks to fringed purses and milkmaid braids, the looks are feminine in a traditional sort of way. Of course, they are not far from modern. The addition of thigh-high leather boots, dark accents and full makeup give the outfits a touch of drama that is not often seen in the calm and innocent countryside.

Shot by photographer Daniel Jackson, the Vogue China 'Neo Folk' editorial is set to appear in the October 2012 issue of the magazine. It stars model Daria Strokous. The Russian beauty was styled by Tiina Laakkonen. She was outfitted in pieces from the likes of Prabal Gurung, Dior, Hermes, Salvatore Ferragamo and more.
2.4
Score
Popularity
Activity
Freshness
Access Advisory Services