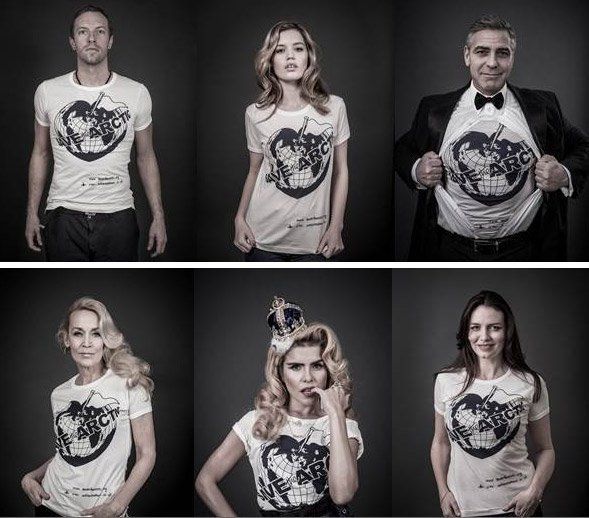 The Vivienne Westwood Save the Artic Campaign Enlists the A-List

Meghan Young — February 12, 2014 — Marketing
References: viviennewestwood & fashiongonerogue
Share on Facebook Share on Twitter Share on LinkedIn Share on Pinterest
The Vivienne Westwood Save the Artic ad campaign showcases the latest t-shirt design on some of the biggest names in the modelling, acting and music industries. Shot in studio against a black backdrop, the white tees stand out beautifully on such star-studded frames as George Clooney, Georgia May Jagger, Chris Martin and Jerry Hall.

The charitable portraits were shot by photographer Andy Gotts created in collaboration with Greenpeace, the Vivienne Westwood Save the Artic ad campaign hopes to raise funds to protect the region for generations to come. As written on Fashion Gone Rogue, "The Arctic is one of the last untouched places on earth." Yet as it continues to open up because of the melting Arctic ice, it is being exploited for its natural resources, which perpetuates the cycle.
2.1
Score
Popularity
Activity
Freshness
Get Better and Faster