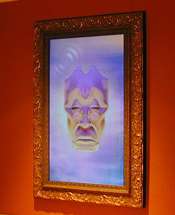 Bianca — March 6, 2008 — Art & Design
References: bornrich.org
Share on Facebook Share on Twitter Share on LinkedIn Share on Pinterest
Imagine never having to stick your hand in a toilet bowl again, never having to scrape crusted on food off a pan or never having to scrub at scuff marks on the floor. In the future, you could have a robot that does all the messy work for you thanks to a new customized, Virtual Butler.

Even simpler than a magic genie in a lamp, summoning your charming robo maid is as easy as evoking him from a magic mirror (which looks normal until you call on him!) His face appears and he speaks back through your home speaker system.

He can also be left messages when he's out an about scooping the litter box or whatever task he's currently involved in. All you have to do is punch in the next chore you want him to do, and he'll get motoring.

"It can be connected to nearly every kind of electronic equipment in a house that include the security cameras, front gate, garage doors, back doors, pool gate, Jacuzzi and the list goes on," according to BornRich.