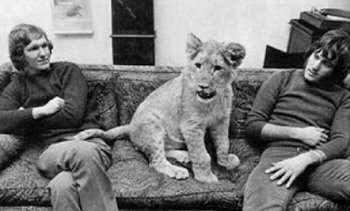 This video is the story of Christian the lion, who two men saved from captivity after they saw it with a "for sale" sign in the window of Harrod's in London in 1969. They brought the lion cub home and raised it themselves until it was too large to handle on their own. After a year, they contacted the legendary George Wiliamson, who released the lion back into the wild in Africa. One year after that, they went to find Christian the Lion in the wild and amazingly, the lion remembered them. This video tells the full story, with all the hugging and a wonderfully cheesy, but super moving, reunion at the end.

It's a tear jerker for sure, although I could do without the Whitney Houston music track.