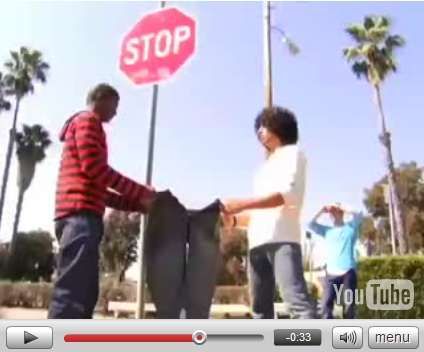 Did Levi's Dupe Us with "Guys Backflip into Jeans"?

Now I am happy to find I was not the only skeptical one. Gawker brands it as a stealth ad for Levi's jeans.

The dead giveaway? In addition to the YouTube username being "unbuttonedfilms", you can hear a dialog line at 0:36 of the video saying: "At least there's no zipper."

Couple this with the fact that Levi's is the only jeans brand that uses "zipperless" advertising for their buttoned jeans, and you have yourself (a not so) stealth advertisement without brand mention.

What seems to seal the deal is that the jeans video follows the exact formula of another stealth ad that went viral exactly one year ago (6 May 2007 vs 5 May 2008). Uploaded by a new username "neverhidefilms", The Guy catches glasses with face went viral with three million views before it was officially revealed as a stealth Ray-Ban ad by Josh Warner, president of The Feed Company, the creative team behind it.


Trend Hunter was one of the many blogs and sites that fell for the trick!

19 Sly Stealth Innovations
Hiding Out in the Open, from Booze Dispensers to Spirituality