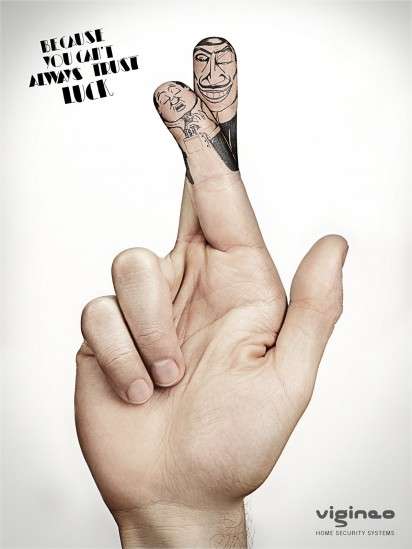 Meghan Young — April 27, 2012 — Marketing
References: ogilvy & ibelieveinadv
Share on Facebook Share on Twitter Share on LinkedIn Share on Pinterest
The Vigineo Home Security Systems ad campaign is incredibly clever. It centers around images of crossed fingers, which represents the group of people that don’t take extra precautions when it comes to safety in their own home. The cartoons drawn on the fingertips, on the other hand, illustrate the campaign’s tag line, “Because you can’t always trust luck.” Anything is possible, and it is important to be ready for undesirable scenarios.

Conceived by Paris, France-based ad agency Ogilvy & Mather, the Vigineo Home Security Systems ad campaign not only calls people out, but it shows them that a lax attitude can have dire consequences. Creative directed by Chris Garbutt, the campaign was photographed by Patrick Messina and illustrated by Mr. Messy.
4.5
Score
Popularity
Activity
Freshness
Access Advisory Services